"THINK AND GROW RICH" AND THE KINGDOM? 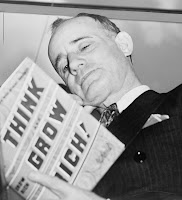