Pray for America, Pray for the Church – A Striking Allegory of the Need for Redirection 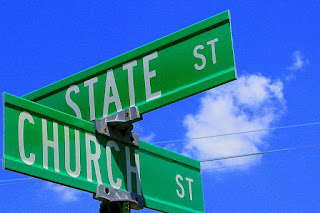 I recently read a thought-provoking article by the “notorious” Umair Haque, whom I once likened to a “prophet without a Bible.” The article, “How Trickle-Down Economics Destroyed America,” takes on a not-so-pretty and somewhat scary underside of the United States. Its revelations are more reason for us to earnestly pray for this land of great promise, which in some ways embodies the hope of the world.

But the most striking aspect of Haque’s article about “God’s Own Country” is that I see in it an allegory of the professing Christian church. Indeed, we must pray for a revival of both church and state (see 1 Timothy 2:1-3).

You should read the entire article. But here's an excerpt that briefly but aptly captures the said allegory:

This is what Grand Experiments do. They produce establishments more committed to the success of the experiment than they are to ever checking very much whether reality squares up with it. It happened in the Soviet Union, it happened in Nazi Germany, and it happened in America, too. The Establishment wouldn’t hear it [they won’t listen to those who try to warn them]. There was simply no way to get them to understand that the Grand Experiment wasn’t working, because they were too busy believing it had to. So they did what True Believers do [believers in the “Grand Experiment,” that is] — they’d cherry-pick their data [talk about cherry-picking Scripture], looking at the stock market [church attendance, collections, numbers of programs and personnel], not people’s lives, they’d shoot the messenger [any one who dares to say something contrary to the “Grand Experiment”], and they wrapped themselves in a bubble of groupthink and consensus.

“A bubble of groupthink and consensus.” Wow! That’s the climax of the allegory and the Grand Experiment of the professing church. But it’s a touchy one. So touchy that, as you might have noticed, I stopped short of paraphrasing it. Suffice it to say that God never moves by groupthink or consensus, though some of that is sometimes humanly expedient. Nevertheless, as tightly and sometimes violently it is being held unto, the Grand Experiment of the church isn’t working. It’s killing the church and its members (see Isaiah 3:2).

You may need a bit of church history and ecclesiology to fully appreciate this striking allegory of the church in Haque’s article on America’s Grand Experiment. The author was obviously unaware of this when he wrote his piece. But Scripture bids us learn from ants, who simply go about their business, unaware of the powerful message they bear for mankind (Proverbs 5:6).

Now, I don’t always agree with Haque, and he habitually denounces “theocracy.” However, we must understand what he means by theocracy, which he tends to mention alongside fascism and authoritarianism. Essentially, he means the imposition of the Grand Experiment of the professing church on the state, which any good Bible student would agree is wrong.

While Christians have a stake in present human societies and should utilize all legitimate channels to protect their interests, we must remember that our kingdom is not of his present world (John 18:36). We are also enjoined to strive for peace with all men to the extent that it depends on us (Romans 12:18), and be ready to make sacrifices, be exploited, and made scum of, all for the sake of the name we bear and the kingdom we advance, the full establishment of which we look forward to in God’s own time and by his own means (Matthew 5:13-16, 38-41, 6:9-10).

Nothing Haque says in his article is new. He only says it with characteristic aplomb and at a momentous time for the country. There have been voices through time that took on the same issues and called for redress and redirection. But the Establishment has been resistant, until the country is on the edge of a precipice. Now, the President of the United States – perhaps the most decorated member of the Establishment alive – has added his voice to the dissenters. This was actually what gave impetus for Haque’s rehash of the issues.

In like manner, not all Christians have been convinced or bought into the ecclesiastical Grand Experiment. There have been personalities and groups through the church ages that discerned something wrong with established practices and doctrines and raised the alarm or chose to chart a different course. But they have been in the minority. And they have often been defamed, shamed, ostracized, excommunicated, and worse. The church’s own time of awakening can’t be too far from here. Chances are, it would likewise involve a prominent voice from within the ecclesiastical Establishment. Zechariah 3 makes interesting reading on this.

Now, so that folks don’t take all this beyond what it’s intended to be, especially on the state (political) side, I would say that I am neither “blue” nor “red,” neither “left” nor “right,” neither “liberal” nor “conservative,” neither “democrat” nor “republican.” I am Christian – a member of the one Church of Christ where “there is neither Jew nor Greek, there is neither slave nor free, there is no male and female, for you are all one in Christ Jesus” (Galatians 3:28).

I am a sojourner in this great land I dearly love and believe in so much. As Scripture teaches, “But seek the welfare of the city where I have sent you into exile, and pray to the LORD on its behalf, for in its welfare you will find your welfare” (Jeremiah 29:7, ESV). That’s where I am.

I am purple. That’s the color you get by mixing blue and red. It is also the color of royalty. “But you are a chosen race, a royal priesthood, a holy nation, a people for his own possession, that you may proclaim the excellencies of him who called you out of darkness into his marvelous light” (1 Peter 2:9, ESV).

Yes, “Whether you turn to the right [red] or to the left [blue], your ears will hear a voice behind you, saying, ‘This is the way; walk in it’” (Isaiah 30:21, NIV). If it’s neither right nor left, neither red nor blue, I suppose that divinely endorsed “way” would have to be somewhere in the transition region, the purple center. I believe that whether we lean left or right at any instance should be issue-based and dictated by the specifics. It’s the way I think we can be most faithful to God, ourselves, and our fellowman (cf. Matthew 22:37-40).

Truly, I am purple. I believe both the blue and red (liberal and conservative) sides of the aisle in both church and state have something true and indispensable to offer. We should be careful not to gravitate to either extreme, neither of which is substantiable, biblically or constitutionally. While truth is static, our appreciation of it is dynamic and progressive. But that progress should not be at the expense of the authentic “ancient landmark that your fathers have set” (see Proverbs 22:28).

The “authentic” qualification of the immovable ancient landmarks set by our fathers is imperative. For example, while the expression “church fathers” has an established connotation in ecclesiastical circles, the authentic church fathers must be traced back to the early church in Acts. The repository of the ancient landmark teachings of these true church fathers – the fundamentals of the faith that should not be moved in our quest for progress – is what we call Scripture. It is given “by inspiration” (an expression that should also not be made to mean more than what it does) and is useful and reliable for doctrine, reproof, correction, and instruction in righteousness (2 Timothy 3:16).

Ultimately, amid the seemingly irreconcilable differences between the liberals and conservatives of the present time, in both church and state, we should prayerfully and patiently look forward to the divine and all-wise unifying intervention of He who “himself is our peace, who has made the two groups one and has destroyed the barrier, the dividing wall of hostility” (Ephesians 2:14, NIV).