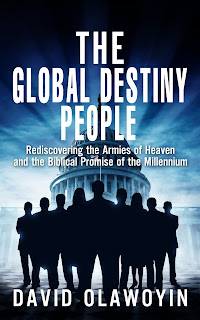 Discover the coming global revolution and the custodians of the destiny of our world and planet!
Available on Amazon as ebook and paper book.
As increasing global crises threaten the world with chaos and the inevitability of the Apocalypse, The Global Destiny People makes a revolutionary rediscovery of the biblical forecast of a millennium of incomparable global rebirth. The book unveils how the coming global reinvention will be spearheaded by the “Armies of Heaven,” a biblical term shown to indicate an extraordinarily powerful global organization, the “Zion Missionaries.” With engagements reaching into every area of human endeavor—politics and government, religion and education, science and technology, commerce and industry, and arts and entertainment— the ultimate goal of the Zion Missionaries subsequent to their empowering encounter with Angels is the radical reordering and post-Apocalypse rebuilding of the entire earth, the conquest of mortality and the ushering in of eternity.

In sharpening this portrait of the promised Millennium and the destiny of our world and planet, David Olawoyin draws upon a variety of biblical, contemporary and secular types, shadows, events and witnesses. Prominent among them is TIME magazine’s milestone publication, the TIME 100 series, which remarkably substantiates the biblical testimony of the composition of the Armies of Heaven. In the process, the author unveils the intriguing millennial portents of some landmark creations and famed organizations of the present time, including the national flag of Israel, the Hollywood Walk of Fame, the Microsoft Corporation, the Freemasons, the Illuminati and the United States of America.

Get your ebook or paper book on Amazon.
(NB: The book is the first in a trilogy. The originally proposed single book was referred to as The Evolution of Eternity in previous articles on this site.)

What People Are Saying About the Book:
“I am truly amazed at the scope of your [vision]. I cannot recall anyone speaking of Biblical Prophecy and the ‘Last Act’—that is, the Millennium and the Ever-After that follows—in the manner that you have, nor attempting to view the Millennium with any skill, unless perhaps the grandmaster of allegory, C.S. Lewis.” — Scot Hale, Christian writer
“This is an amazing piece of work. You say early on that you want to ‘bring the Scriptures’ alive—and you certainly do that. Your knowledge is quite astounding and you write about ‘great’ things in a way that is accessible to those of us who are not familiar with the Scriptures.” — Debbie Roxburgh, “Speedy McCready”
“This is extremely well researched and written! You have incredible insight and have put together a staggering amount of information.” — Patti Tingen, “A God for All Seasons”
“A must-read for anyone awaiting the coming Millennium. Thought-provoking and interesting, David ties in Scripture to uphold a uniquely detailed expounding of the coming reign of the Messiah. Right, wrong or unsure, his revelations inspire and challenge the reader to see Scripture from some fresh angles. A greatly enjoyable read.” — Unknown
“A truly well-wrought explication of Biblical allegory and prophecy that actually makes sense!”  — Jim Heter, “The Lamia”
“Compelling writing! …a dynamic piece that explores the Millennial Kingdom in a way that I personally have never thought of before… There is a place for this fine work; it's so enjoyable to read, and I'm confident that many people will feel the same. Your piece is a poem of fresh thoughts about what the world will be like when [Jesus] returns, and that fascinates me! What I love most about your piece is that over and over again, you lay tribute to Jesus… I am touched and edified, and encouraged, for that glorious day.” — Sam Cronin, a Bible Believer
“What can I say that hasn’t already been said—nothing. I will however reiterate the sentiments: complete work of genius. I do believe God has truly afforded you the gift of insight, discernment, wisdom, understanding, and knowledge. Wisdom is highly esteemed and so is your book.” — M. Chad Rose, “Convoluted Christianity”
“This is one book that I believe every Christian should read. It is excellently written and presents an insightful perspective of the great heritage that we have in Christ.” — “Mikeydot”

Get your ebook or paper book on Amazon now.